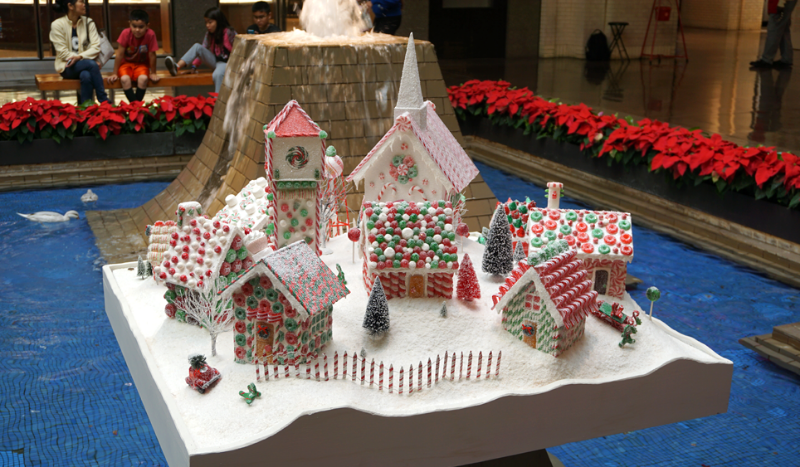 You probably don’t know Suzanne O’Brien, but when you stroll through NorthPark Center in November and December, you likely see her work.

Her snowy candy village and topsy-turvy tower decorate the duck pond in Neiman Marcus Court, while her snowman family stands in front of the LEGO store and her elfin ski slope is in the corridor flanked by Microsoft and ZARA.

“When I set out to create something for NorthPark, I want it to be unique,” says O’Brien. “I try to include a reference to the place itself, along with some whimsy. It evolves as I go.” 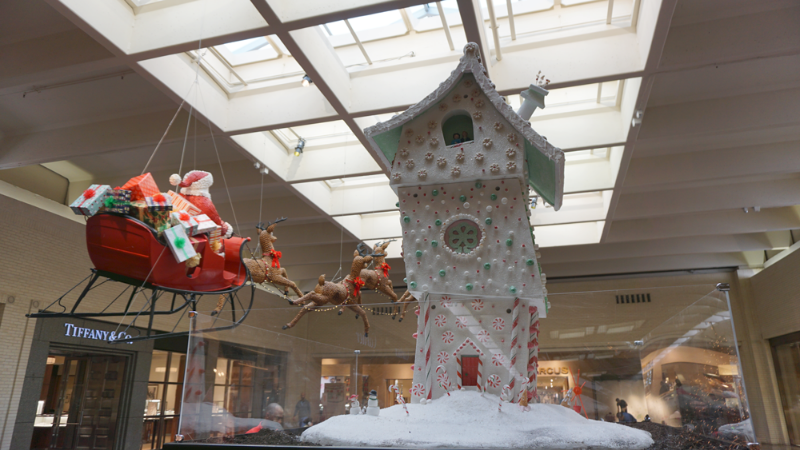 The most thematic piece is the crooked, candy-dotted tower that sits atop one of the sloped brick planters. It’s speckled with NorthPark icons.

A Salvation Army red kettle, for instance, hangs from a miniature rendition of the 48-foot I-beam sculpture by Mark di Suvero in the NorthCourt.

The couple smiling in the top window are a nod to NorthPark owners and managers Nancy Nasher and David Haemisegger, and their children are represented in the second tier. The man in the lower window represents the late John A. Hardman, who voiced the annual Scrooge Puppet Theatre for decades.

The tower and nearby candy village, which is populated by tiny gingerbread men, complement the marshmallow and licorice Santa Claus and pecan reindeer that fly above.

“The original idea was that I would do something that looked edible,” O’Brien explains.

But while the overhead Santa and his team are decorated with actual candy and nuts, O’Brien’s tower and village only look like the real thing. Most of the candy is plastic, and she fashioned the gingerbread men and waffles from clay. 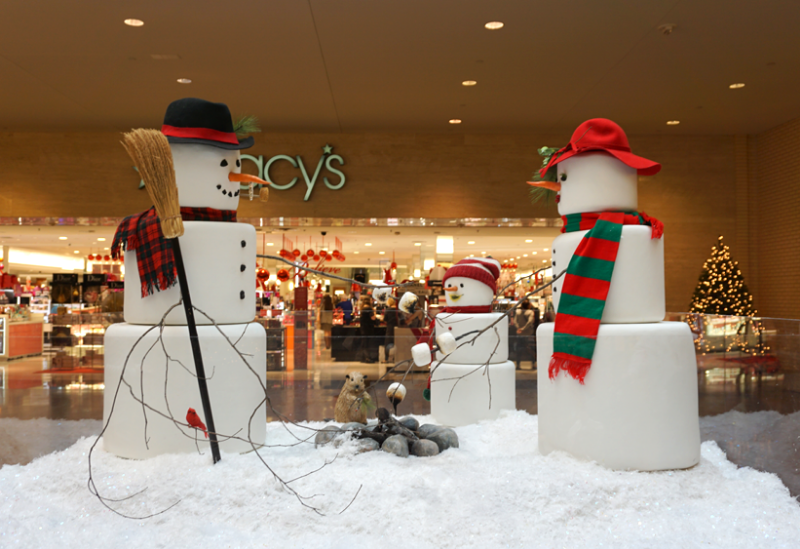 Over in the north corridor, O’Brien’s tongue-in-cheek marshmallow snowman family of three is roasting marshmallows around a campfire, joined by a little beaver toasting a stick. It was impossible to buy hats big enough to fit these snowmen, so she made them herself.

Her fourth holiday piece features little elves cavorting on a slope that mimics the curved tile planters that children love to climb up and slide down. But her snow-covered take is a bit askew, and miniature toys spill from the top.

O’Brien’s artwork is meticulous. To replicate the look of the planter, she fabricated about 1,000 miniature tiles by rolling clay through a pasta machine, cutting it and firing the tiles in a kiln. Each was then trimmed to fit the curvature of the sculpture and glued into place.

“I used polymer clay for most of the figural and small sculptural elements of all the pieces–elves, gingerbread men, some of the candy and the marshmallow snowman's nose,” O’Brien explains. “Elves were constructed using wood with aluminum armatures.  All required several firings, carving, painting and sealing.”

And all that snow? It’s from a Canadian company that specializes in effects for movies.

“When visitors see my work, they know that they won't see it anywhere else,” O’Brien notes. “I hope that it makes them smile, and that they will want to return to see it again.”