Among the 20th and 21st century art shown throughout NorthPark Center, none may be as instantly recognizable as those by Andy Warhol. And for the first time at NorthPark, all four series in the Nancy A. Nasher and David J. Haemisegger Collection are on view at the same time. Read on for four ways to see Warhol at NorthPark and make a point to find them all during your next visit to the shopping center! 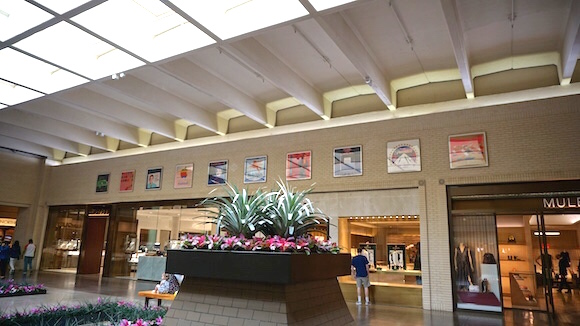 Our first stop is Neiman Marcus Court, where two series fill the classic white brick between the ceiling and our storefronts. Ads is installed above Eiseman Jewels, Rolex and Mulberry. In this series, Warhol successfully strips these images of their intended meaning and purpose by altering their context. The Ads are both nostalgic and contemporary. Though the prints were done in the 1980s, the images and advertisements represented come from the 1960s, demonstrating Warhol’s continued fascination with American myth and marketing. Here Warhol highlights the relationship between the Hollywood film industry, celebrity culture, and American consumerism. 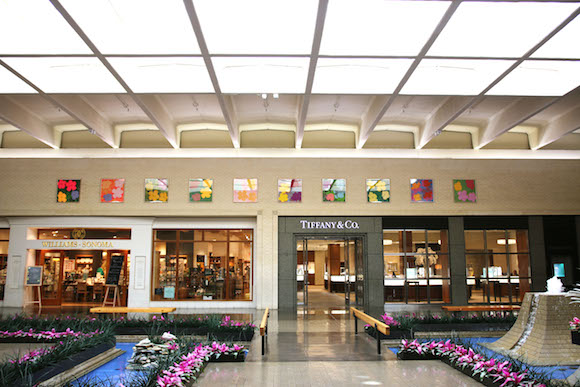 A quick 180° turn will place you in front of Williams-Sonoma and Tiffany & Co., above which hangs Flowers. In 1964, Warhol produced his first Flowers series, based on a photo spread of hibiscus flowers in the June 1964 issue of Modern Photography magazine. To produce the 1964 series, the artist used a combination of techniques, including silkscreen, acrylic paint, Day-Glo paint, and pencil. Each canvas is a perfect square, freeing the works from having a set orientation, thus allowing them to be installed in various different ways. Warhol’s 1970 Flowers series, on view, is a variation of the same hibiscus photos from his 1964 series; however, he explored new color combinations and worked strictly using the silkscreen technique. 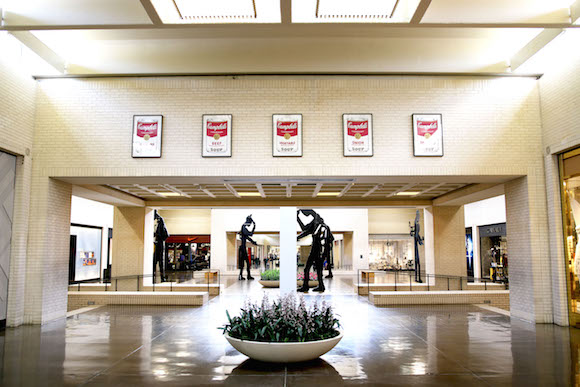 Stroll north toward Dillard’s and you will happen upon Campbell’s Soup Collection, just past Jonathan Borofsky’s Five Hammering Men. The artist exhibited his first Campbell’s Soup Cans series in 1962. The original series of 32 was painted by hand and arranged to look as though the cans were stacked on a shelf in the grocery store. Each canvas corresponds to an existing soup produced by Campbell’s at that time. This series on view, produced in 1968, is a portfolio of ten screenprints.

Travel past the bubbling Dillard’s fountain into EastCourt and look for Myths. (Many may remember Ads being installed in this spot for decades.) In this series, the artist refers to the beginnings of the cinema and the characters recognized and adored by millions all over the world. Most images in this series are taken from old Hollywood films or 1950s television, including Mickey Mouse, Howdy Doody, and Santa Claus, as well as Dracula, The Wicked Witch of the West, and Uncle Sam. In The Shadow screen print, Warhol’s own image appears. In some ways, it isn’t surprising that Warhol included himself here. By the 1980s, when he made this work, Warhol had become one of the most influential artists of his time. Exploring his own fascination with fame, he turned himself into a kind of modern-day myth.

There you have it – the locations and a bit of background on each Warhol series currently installed at NorthPark. For more information on the art now on view, click on over to our art collection page or download our art map.