The Pop Up Project 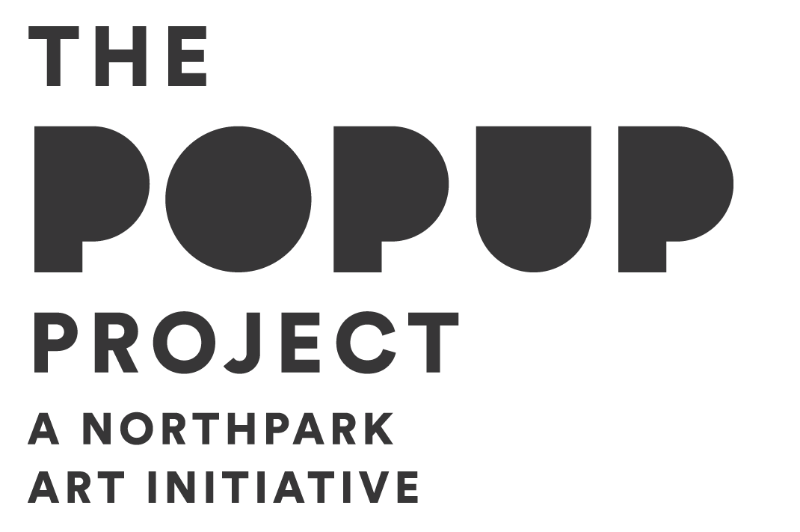 The Pop Up Project aims to further the dialogue between NorthPark Center's world-class art collection and the surrounding art community. Inspired by the concept of pop-up stores—temporary spaces that introduce young, up-and-coming brands to a new audience—The Pop Up Project engages a rotating roster of contemporary artists living, working, and/or exhibiting in Texas, providing them with two-dimensional spaces to activate throughout the year. As new, vibrant works continue to "pop up" throughout the year at NorthPark, we hope you enjoy discovering, participating, and interacting with this initiative, including tagging your photos on social media with #PopUpProjectNP. 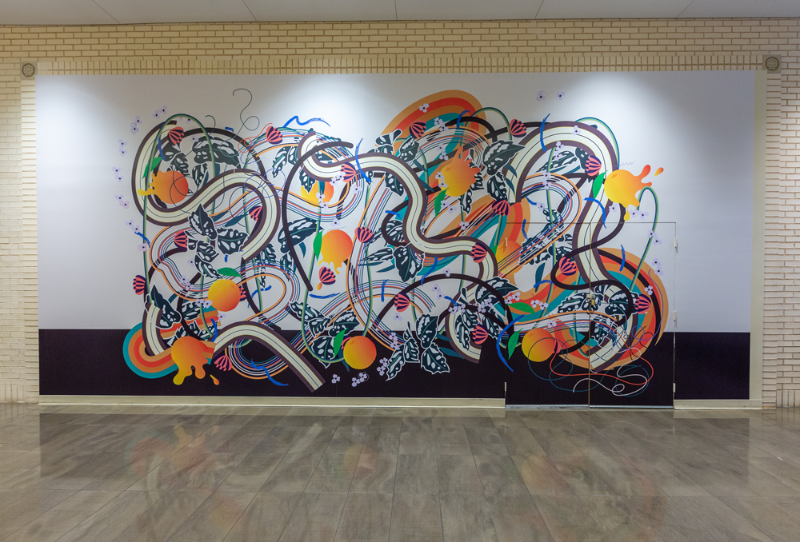 In his work, Stephen D'Onofrio explores the relationship between physical spaces and the objects we fill them with. He frequently appropriates the visual language that accompanies mass-produced objects, drawing extensively from domestic decorative elements, such as imported vases or printed wallpaper.

In his most recent series, the artist has taken an interest in still-life painting and its trajectory from 17th century Dutch masters to the present day portrayals of assembly-line production in today's economy. He disassembles the classical composition of a still life, edging toward abstraction. Through his collision and dissection imagery, he offers a critique of the hyper-commodified art object.

This piece is located on Level One near Macy's. 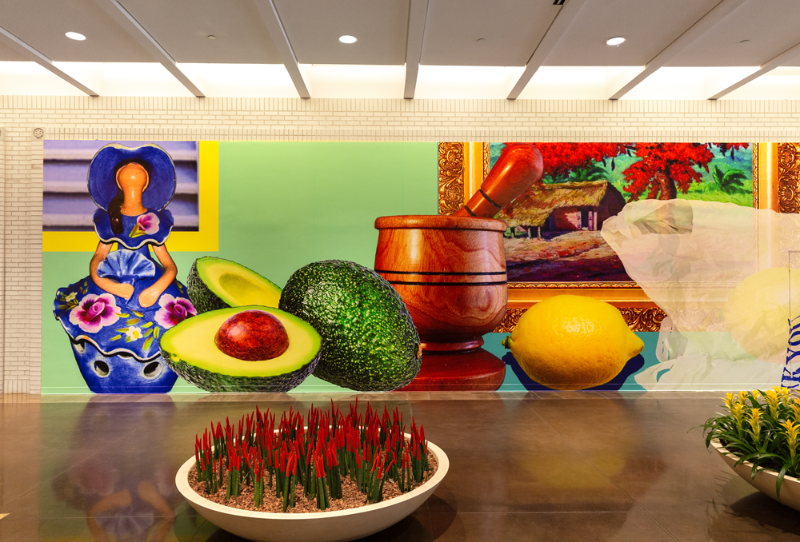 Born and raised in Washington Heights, a predominately Dominican neighborhood that sits above West Harlem, Dominican-American artist Lucia Hierro focuses on her experience in New York City and her Dominican roots. Throughout her body of work, the artist explores themes related to class, ethnicity, gender, taste, and privilege via ordinary objects rescaled and recontextualized.

Hierro often transforms everyday items consumed by society—magazines, rubber gloves, plastic bottles, apples—into monumental relics. In Kitchen Still Life with Yoryi Morel, Hierro juxtaposes conventional objects that imply a sense of mass production (such as a plastic shopping bag) with highly contrasting items that signify singularity and the handmade (a reproduction of a painting by Dominican artist Yoryi Morel or a hand painted figurine). The intermixing and overlapping of such objects with certain implied signifiers, on view for the public to "consume," perhaps encourages a questioning of our preconcieved notions related to these material objects and, more generally the products that define commodity, consumerism, and culture.

Hierro received a BFA from SUNY Purchase in 2010 and an MFA from Yale School of Art in 2013. Her work has been included in solo and group exhibitions at the Bronx Museum of the Arts, Sugar Hill Children's Museum of Art and Storytelling, and Elizabeth Dee Gallery, all in New York; Casa Quién, Santo Domingo; the Museum of African Diaspora, San Francisco; Jeffery Deitch, Los Angeles; and most recently Sean Horton (presents), Dallas. Her work is a part of the JP Morgan Chase art collection and the Rennie collection in Vancouver.

Hierro debuted her artwork in Texas for the first time during her exhibition at Sean Horton (presents) in 2019. Sean Horton (presents) is the recent project of Sean Horton, who founded and directed galleries in New York and Berlin, beginning with Sunday L.E.S. on the Lower East Side of Manhattan in 2006. Horton Gallery realized more than 150 exhibitions, art-fair presentations, and offsite projects around the world. A native of North Texas, Horton has made Dallas his center of operations. Horton Gallery has been a member of the New Art Dealers Alliance (NADA) since 2008 and has participated in NADA Miami, NADA New York, The Armory Show, Art Brussels, Independent Brussels, Untitled Art Fair, and the Dallas Art Fair, among others.

This piece is located on Level One in NorthCourt. Read an exclusive interview with Hierro on our blog. 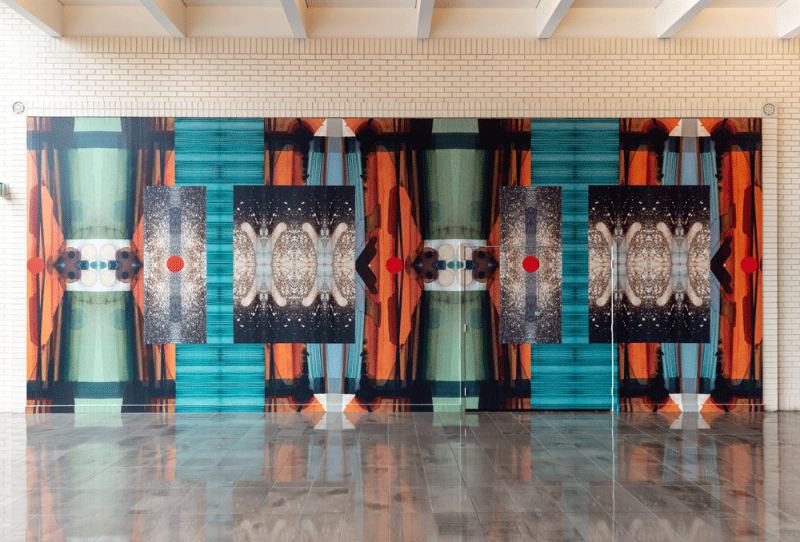 Lucas Martell primarily works in traditional paint mediums, using conventional methods. For this digitally collaged piece, he focuses on bold gestural marks from his watercolor paintings. Layers, viscosity, translucence, opacity, and saturation define this composition and highlight detailed fragments of his skillful works. Fluid in ways language cannot be, Martell communicates through paint. He manipulates the medium like a balancing art, influenced by memorized pictures and fantastical scenarios. Elastic imagery is interrupted by paint viscosity, synthesizing or suspending thoughts, like a still frame, accentuating details.

This piece is located on Level Two behind the AMC Ticket Counter. Read an exclusive interview with Martell on our blog. 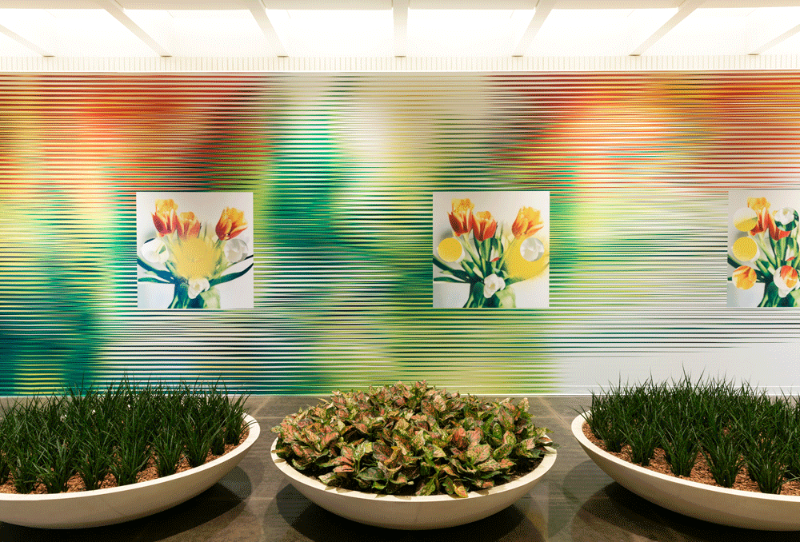 John Pomara is interested in the human element of technology. His abstracted digital images depict blurs, glitches, and printing imperfections, contradicting our vision of modern technology as seamless, cold, and rational. Inspired by entropy and mechanical failure, Pomara uses apps, disrupted coding, printer errs, and the Internet to create visual representations of error. These new flower forms are disrupted into an abstraction to see beauty in a new way reflective of the vernacular of computer technology.

Pomara's work has been featured in numerous exhibitions both nationally and internationally, including a solo exhibition at Barry Whistler Gallery in Dallas, exhibitions at the Dallas Museum of Art, the Museum of Fine Arts Houston, and the Meadows Museum; he has also shown extensively in solo and group exhibitions in New York, Chicago, Miami, Los Angeles, and London. His work has been written about critically in major art journals and magazines such as Flash Art, ARTFORUM, Art in America, Art News, Art Papers, and The New Art Examiner. 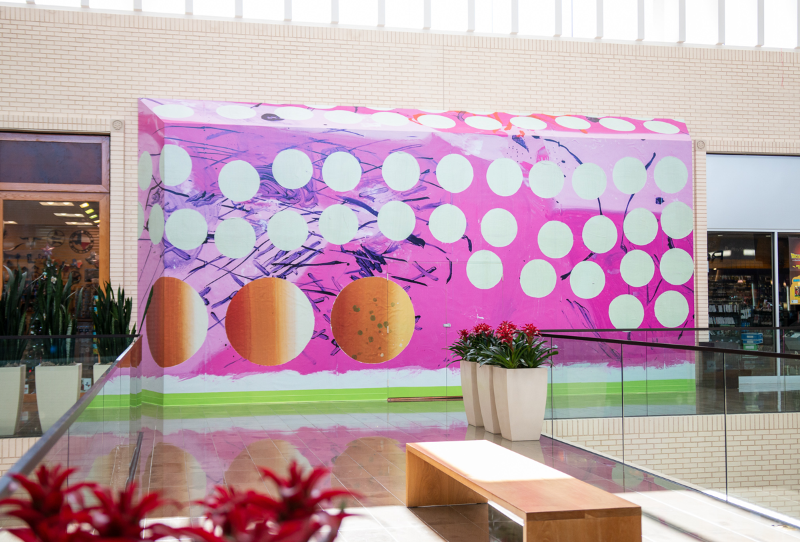 Shane Tolbert's explorations are concerned with the process of materiality of painting, and the way images can be made by relying on chance, unorthodox materials, and gesture. Although his work builds on a premise of color field painting, the techniques Tolbert employs are far from traditional. He begins by thinning down acrylic paint which pools and flows on plastic sheeting. Once dry, the stains imprinted on the sheeting are applied to canvas using more wet paint as a binder. After allowing the plastic to dry on the canvas, Tolbert then removes it and what is left behind is the intact painted gesture, imprinted with the textural language of ripples and folds inherent to the plastic.

Tolbert's recent work on found objects shows a growing consciousness of the ecological impact of his studio practice, but also a new interest in the signs of embedded meaning and the history of discarded building material and refuse. The rough cuts, sun bleaching, drilled holes, and gear impressions on the face of the honeycomb cardboard boxes become an integral part of the paintings' formal language, as well as suggesting other, more inaccessible past lives of objects. The colors of the New Mexican high desert allude to Tolbert's practice of walks and hikes, and his interest in geological time.

This piece is located on Level Two between Nordstrom and Macy's. Read an exclusive interview with Tolbert on our blog. 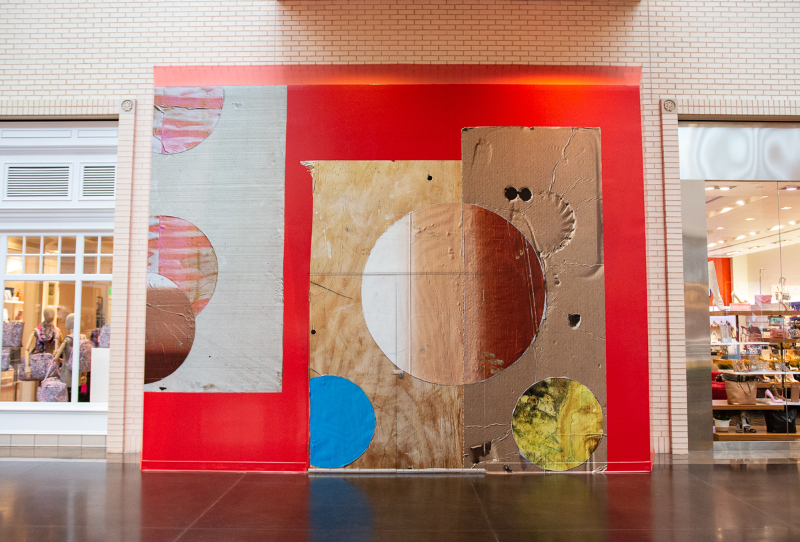 This piece is located on Level One between Nordstrom and Macy's. 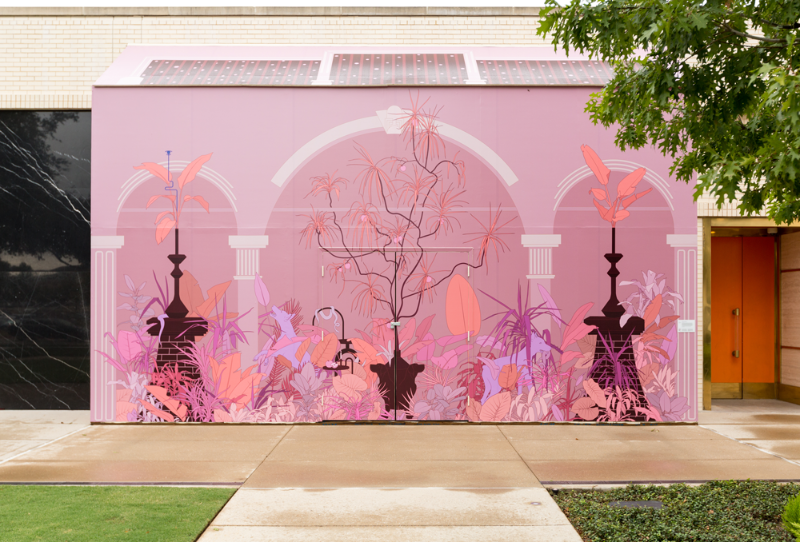 Leah Flook is interested in the meanings behind religious tapestries and still-lifes, often exploring and reworking their symbologies within her work. These genres are known for portraying thoughts of mortality. For example, a candle slowly burning marks the passage of time, wilting flowers show our bodies' fragility, and a skull reminds us of our soul's eventual departure from our physical beings. Flook integrates these themes within her work to create what she considers an arena for "battles" to take place between multiple opponents. When creating these arenas, Flook things about a space in which physical confines are eliminated and where thoughts can be explored freely. 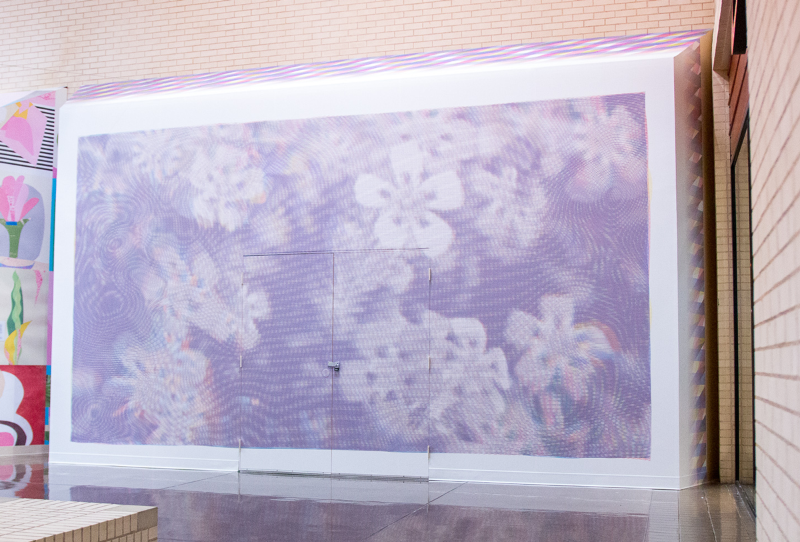 Garden by Luke Harnden integrates themes found in his paintings and sculptural objects into a site-specific, digital mural. Flowers have long been incorporated into artworks in order to address a wide range of themes—from aesthetic beauty, vulnerability, and sentimentality, to symbols of triviality or banality. In Garden, Harnden removes the image of a flower from its original context, as a photograph featured in a National Geographic magazine that classified certain flowering plants; in its repurposed form, the viewer may question whether the floral pattern in Garden refers to an act of cultivation and maintenance, or the playful state of a wild garden.

The image itself is comprised of a complex arrangement of four lenticular layers (cyan, magenta, yellow, and black) that are then combined to loosely recreate the original gray color palette. These layers and their interaction compete with the original imagery of the photograph, creating a prismatic tension between the reception of an overall image and the structure which holds it in place.

Harnden is an American contemporary artist working in painting, scultpure, and video. Harnden's work incorporates installation, found images, objects, and process-based sculpture and painting. He has exhibited regionally and nationally and was a founding member of the artist run cooperative project known as Beefhaus in Dallas (2013-2016). Harnden received an MFA from the California Institute of the Arts in 2019. 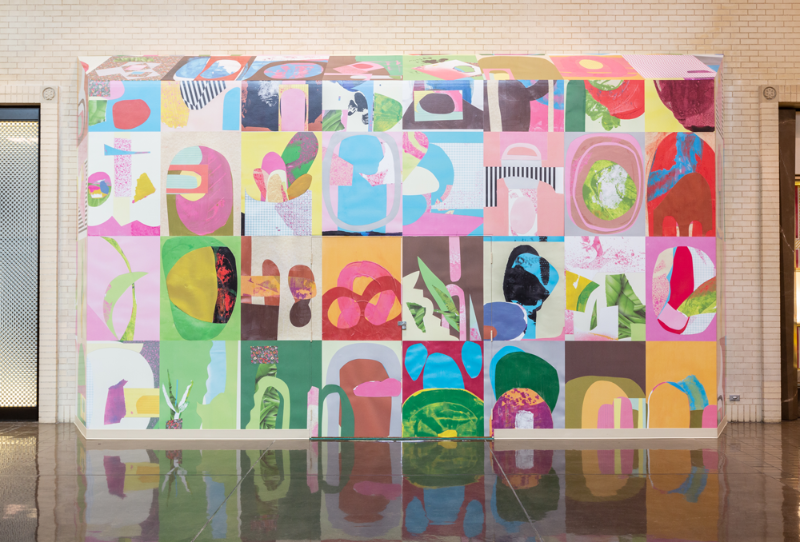 Since arriving in the United States, Puerto Rican artist Juan Alberto Negroni is often asked where he comes from, why he moved to Dallas, and how his native land compares to Texas. Despite his willingness to explain Puerto Rico's deep political, religious, and cultural history, he frequently finds that there are certain topics that words cannot properly describe. Through his artwork, Negroni has developed a visual language that mimics the multilayering of such answers and the idiosyncrasies of his homeland.

The imagery within the Archipelagos Series evokes a sense of distance inherent to displacement and the loss of one's identity, along with the quest to reclaim and recover it. Negroni states, "While working on this series, I was looking at Puerto Rico from a geographical and ideological distance." Some of the collages suggest an abstracted representation of a bird's eye view of an island, each seeming to float aimlessly atop the ocean's surface, while others may suggest a removed depiction of Puerto Rico's native vegetation. By portraying these concepts with the use of vibrant color combinations and dynamic compositions, Negroni comments on the folkloric, preconceived, often-flawed ideas society maintains toward other countries and cultures. 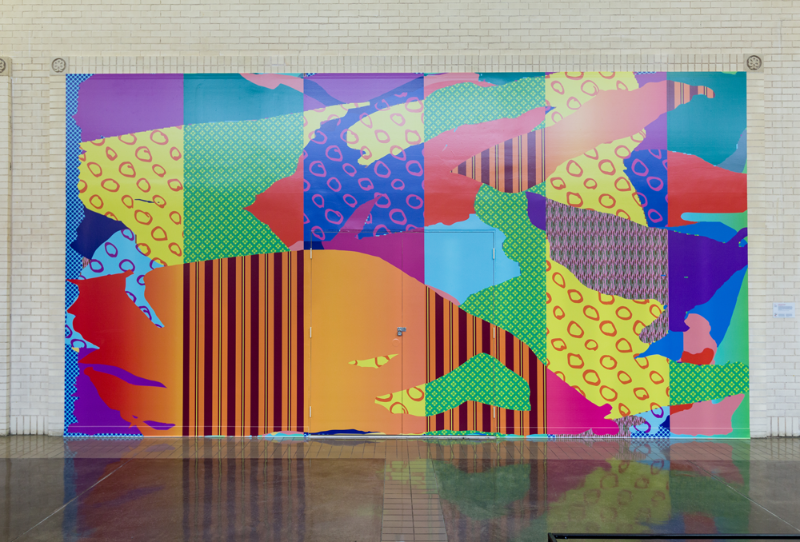 Zeke Williams begins his digital creations in the gaming app "Noby Noby Boy" to create unique compositions. The designs continue to evolve in Adobe Illustrator, where the outlines are filled with prints either remixed or originally created by Williams. In his studio practice, each original work is printed onto canvas and presented as a continuous diptych or triptych. In Athor/Laurentia, Williams partnered with a fabricator to produce and install the designs in vinyl. Working in an exclusively digital format, Williams sees the possibilities for his artwork to become infinite, eliminating limitations often present in other classical mediums.